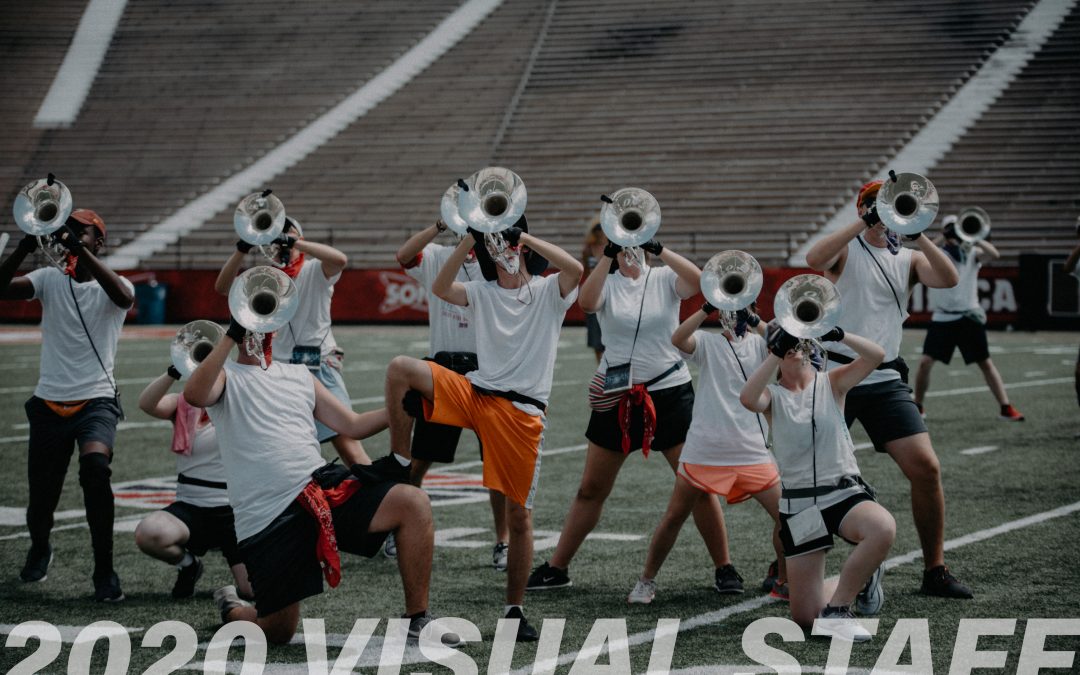 We are happy to introduce the Visual Staff for the 2020 season! Returning to lead the visual team is Caption Head Evan McAleer, who has been with the corps since the 2016 season. Under McAleer, the 2020 Louisiana Stars will learn from a talented and enthusiastic staff that are eager to challenge and grow our members. Evan T McAleer is extremely happy to be returning for his fifth year with the Louisiana Stars of which this will be his third as Visual Caption Head. Evan is an active performer, designer, and educator. Evan has been a visual and drill designer for numerous schools across Louisiana for the past 7 years, and is thankful for the opportunity to help create performance opportunities for performers of all skill levels. In addition to his work in design and education, Evan serves as a member of the Allumer Quartet of which he is a founding member, and continues to work toward expanding the horn quartet repertoire through the commissioning and premiering of new music.

Jordan Koenig has worked with the Louisiana Stars since 2016 as a visual technician. Jordan graduated from LSU in 2015 with a Bachelor of Science and is currently in his last year at Vanderbilt University Law School. During his time at LSU, Jordan played trumpet for four years (2011-2015) with The Golden Band from Tigerland and played mellophone and narrated for two seasons (2012; 2014) with the Cadets Drum and Bugle Corps. Following graduation, Jordan will begin working at a Texas-based law firm as a litigator focusing primarily on Oil & Gas disputes. Sophie first fell in love with drum corps at the age of 12. She began her drum corps career as an inaugural member of the Louisiana Stars Drum & Bugle Corps in 2014. She marched a second season with Louisiana Stars in 2015. Sophie aged out with the Bluecoats Drum & Bugle corps in 2016, participating in the first DCI World Championship in the corps’ history. Sophie is from Mandeville, LA and graduated from Fontainebleau High School. She holds a degree in Music Education from LSU, where she was a member of The Golden Band from Tiger Land for 4 years. Sophie is currently a music teacher at Odessa Elementary School near Tampa, FL. Her previous instructional experience includes Fontainebleau High School, East Ascension High School, and Louisiana Stars Drum & Bugle Corps. Jordan is currently the band director at Vinton Middle School in Vinton, Louisiana. He is a native of Houma, Louisiana and has received his BME from McNeese State University in Lake Charles, Louisiana. While attending McNeese, Jordan was a member of numerous ensembles including Wind Symphony, Jazz Band, Marching Band, Student Brass Quintet, Trumpet Ensemble, Brass Ensemble, and Chamber Singers. Jordan’s passion for drum corps developed at the age of 12 when he was first introduced to the activity by his middle school band director at the time. He used that drive to push for success during high school marching band, college marching band, and eventually onward to march with the Madison Scouts during the 2014 season. His drum corps now continues with the visual staff for the Louisiana Stars Drum and Bugle Corps. Jordan stays active performing for small local events, the Lake Charles community band, Calcasieu British Brass Band, and the British Brass Band of Louisiana.

Tyler is currently a Well Site Manager for Chevron in the Permian Basin. On his days off he has been teaching and designing at a premier high school in Louisiana for the last 7 years.  In addition to this, Tyler also served on the Visual Staff of Legends Drum and Bugle Corps from 2016-2018.  Tyler is returning for his second year as a member of the Louisiana Stars Visual Staff. Joseph began his marching career with the Model High School Marching Band in Rome, GA. He marched there for five seasons playing trumpet (2008-2012), in addition he marched two seasons with the school indoor percussion ensemble (2012-2013). He performed two marching seasons with Spirit of Atlanta Drum and Bugle Corps (2015-2016) playing lead trumpet. His recent activities in the summer were working with the Southeast Whitfield Marching Band in Dalton, GA.

He is currently a senior majoring in Music Education at Jacksonville State University in Jacksonville, AL. He was a member of the Marching Southerners, the university’s marching band, for six seasons (2013-2018) playing lead trumpet. In the most recent season he was featured as one of the trumpet soloists. Other collegiate ensembles he has participated in include the University Symphonic Band and Trumpet Ensemble. Following his graduation, Joseph plans on pursuing a Master’s degree in Instrumental Conducting.

This is Joseph’s second season with Louisiana Stars and also his first time teaching a drum corps. He is very excited for this opportunity and can’t wait for the season to begin! Sharie Mahler is a native of Destrehan, Louisiana, and grew up in a musical home. After receiving her Bachelor’s Degree in Music Education from Southeastern Louisiana University in 2014, she taught K-6 music and choir in St. Tammany Parish and began instructing visual basics at Mandeville High School. In 2015, Sharie began working towards a Master’s Degree in Music, designing drill and choreography for Mandeville, and teaching piano lessons at Northlake Academy of Music. Sharie has worked as a visual instructor for numerous high schools, as well as the 2 time WGI medalist, Elite Independent Percussion.

Upon fulfilment of her graduate degree, Sharie began teaching at her current position as Associate Band Director at Destrehan High School. She designs drill and choreography for the Marching Band, as well as for the St. Charles Parish RiverWinds Indoor Winds Ensemble. Established in 2017 under her direction, RiverWinds has won second place in the LMCGPC A Class Championships in 2018, and first place in 2019. Additionally, in 2019, the ensemble won the WGI South Power Regional and was a WGI World Championships A Class Finalist.

Above all, Sharie follows an Art for Art’s Sake mentality and strives to make every student’s experience a positive one. A native of Nashville, TN, Julian Gonzalez was a performing member of Music City Mystique and Spirit of Atlanta. Since 2009 he has been teaching Percussion and Visual programs throughout the United States.
His work includes visual design, staging, choreography and show consultation from theater to marching arts programs. He is also an active visual judge in the United States. Emily Schlueter is originally from Youngstown, Ohio. She studied exercise science at Bowling Green State University in Bowling Green, Ohio and graduated with a B.S. in Education in 2014. In 2017, she graduated from Walsh University in North Canton, Ohio with a Doctorate of Physical Therapy.

Emily was a member of the Glassmen Drum and Bugle Corps of Toledo, Ohio from 2008-2012 where she played the mellophone and served as horn sergeant during the 2012 season. She marched with Matrix Performing Arts of Akron, Ohio in 2011 and 2013 as a member of the visual ensemble and the cymbal
line. She worked with the Troopers Drum and Bugle Corps during their 2017 and 2018 seasons as a
trainer and visual tech.

Emily currently works as a pediatric physical therapist in the Nashville, Tennessee area where she lives
with her boyfriend and two cats. She is very excited for the opportunity to work with the 2020 Louisiana
Stars! Ian graduated from Fuquay-Varina high school in 2014 as part of the Tri-M Music Honor Society and International Thespian Honor Society. He marched with Raiders Drum and Bugle Corps in 2015 and Spirit of Atlanta 2016-2018 on mellophone.

Ian has taught with Apex Friendship High School’s marching band in 2016 and 2017 as well as Bob Jones High School in 2019. He was also on staff at Raiders Drum and Bugle Corps for the 2019 season. He is very excited to be working with the Louisiana Stars this season. Jaren Braud is a native of Orange, Texas and graduated with his Bachelor’s Degree in Instrumental Music Education from Mcneese State University. While attending college, Mr. Braud was given multiple performance and educational opportunities, including a season with the Finalist-Level Crossmen Drum and Bugle Corps out of San Antonio, Texas playing Trumpet and 2 seasons on the Pride of McNeese Marching Band Leadership Team. Mr. Braud now occupies the position of Assistant Director for the East Chambers Independent School District in Winnie, Texas where he continues to bring success to both the Concert and Marching Band programs. Parker attends the University of Memphis, where he was a member of the Mighty Sound of the South Marching Band. Parker is getting his Bachelor of Science in Civil Engineering with a concentration in Transportation Logistics. Parker also instructs engineering labs at the university. Parker started his drum corps career with Music City Drum and Bugle Corps in 2015. In 2016 and 2017 he served as trumpet section leader and Horn Sergeant for the corps. Parker most recently taught at Collierville High School in the greater Memphis area. Taylor Winkler is excited to be joining the Louisiana Stars Drum and Bugle Corps for the 2020 season. Originally from Marion, Indiana, Taylor currently lives in Cookeville, Tennessee where he studies Music Education at Tennessee Technology University. Instruments of study are Euphonium, Trombone, and Tuba. In previous years, he has marched with the Blue Stars Drum and Bugle Corps. Taylor currently teaches at Ravenwood High School in Brentwood, Tennessee and Hillwood High School in Nashville, Tennessee where he holds various visual and musical responsibilities. He has also worked with local middle and high school brass sections in the area. As an instrumentalist, Winkler has been a multiple time finalist at the Derryberry Concerto Competition, and has given various recitals and master classes throughout the state.